11 HOLLYWOOD CELEBRITIES WHO OWN FRENCHIE BULLDOGS 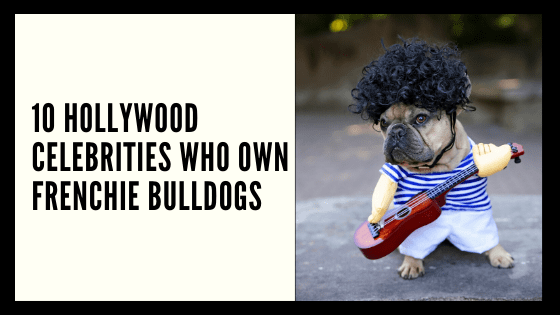 French Bulldogs or Frenchies whichever name you choose to call it are irresistible dog breeds with a very cool personality. It is very hard not to be attracted to their innocent cute faces and bat-like ears. They are must-have pets and have been recognized severally on the covers of different magazines, and all dressed in glamorous outfits.

It is no longer news that the French Bulldogs are kept as pets by famous Hollywood celebrities, from Hugh Jackman to Madonna, Frenchies have become even more remarkable than just being a regular pet. Why not? They are very adorable, nurtured to be loyal, friendly, and intelligent, although they tend to be stubborn and silly, this only happens when they are displeased with a particular situation. Even human beings portray this trait sometimes, so it is ok to say that they, too, possess some human traits, and that’s cool.

Hollywood celebrities and French Bulldogs go together like peanut butter and jam, and even though they are used to heads turning when they walk in a room, but when their Frenchies dress to the nines, it is hard to compete.

Famous Frenchies are popping up everywhere, so get ready to get your “Awww” on with these favorite names and their fun Frenchies, and we can all agree that they bring smiles on our faces each time we watch pictures or videos of their display on our Instagram feeds sitting cutely with celebrities.

Here is our list of Hollywood Celebrities who own French Bulldogs:

The former footballer and Victoria Secret owner are not left out in the frenzy of owning a Frenchie, and on May 2011, Victoria Beckham tweeted a photo of David Beckham with their French Bulldog, Scarlet.

He might be the Wolverine, you know, but Hugh Jackman’s favorite animal is his adorable French Bulldog Dali. He is known to be a great fur dad and regularly seen taking a walk with his Frenchie in their New York City neighborhood, even in the dead of winter. The dog is named after their adopted son Oscar’s favorite artist, Salvador Dali, because of the way his mouth curls and the mustache.

Jeremy Piven never goes out unaccompanied without his companion, Bubba short form Bubs. Since getting him in 2017, Jeremy and Bubba have been seen on a regular in L.A and also on the set of his new series “Wisdom of the Crowd.”

The beautiful model is seen walking around in New York City in Reebok sneakers and holding a cute french bulldog.

The amiable Empire star in 2017 added a French Bulldog called K-Ball, who has adapted fully in his new life of luxury, lounging in tufted bed space and dressed in slick doggy coats.

Reese joined the French Bulldog club in April 2016 when she welcomed Pepper into her family and continues to leave us with the “wow” effect whenever she uploads adorable pictures of her Frenchie pup on all her social channels especially Snapchat.

One striking feature of the Duff moment is that she lost her Frenchie, Beau, but couldn’t stay away from Beau’s family line, and adopted Peaches, Beau’s sister. She leaves us with a caption on Instagram, “ I am Peaches… I am Beau’s sister and new trouble maker at the Duff House”. Cool!

Brutus and Hobbs are Dwayne’s favorite pet buddies. Before Brutus passed on, Dwayne shared a post about how he rescued him from drowning in the pool and Hobbs managing to survive on his own by dog-paddling. However, without his buddy, Hobbs is settling into Dwayne’s family perfectly fine, and they have been pictures of Hobbs’ milestones on his Instagram feed, including his first experience on the plane.

The evergreen singer welcomed Gypsy Rosa into her family on her 57th birthday with the caption, “Best birthday present ever.”

Lady Gaga has been a member of the Hollywood Celebrity French Bulldog Owners and added Koji, Asia’s brother, to her brood and is excited to see what trouble he will get into with his big sister, Asia.