8 Foods You Should NEVER Give Your Frenchie 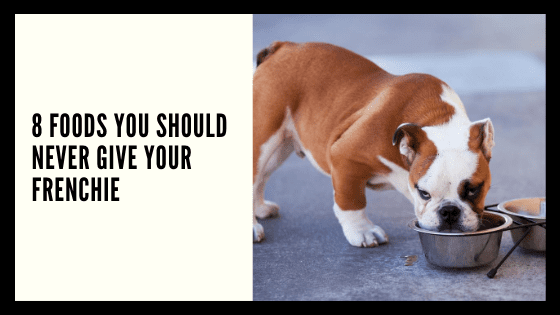 All dogs beg, and all “cool” dog owners give in SOMETIMES. We know your Frenchie enjoys a good table food every now and then, but it is important to know where to draw the line. As you probably know, French Bulldogs have a more sensitive stomach than some other dog breeds.

In order to reduce sickness, you need to avoid certain foods. Some of the foods in this list are very toxic and could result in poisoning which, in extreme, leads to death. Here are the most dangerous foods for French Bulldogs.

Chocolate contains a toxic substance called theobromine which can lead to a range of health problems in Frenchies if eaten in large quantities. This can include abnormal heartbeats, tremors, seizure, and even fatalities. Dark chocolate is considered the most poisonous to Frenchies.

All of these are part of the Allium family and are poisonous foods for French Bulldogs. It doesn’t matter how they are cooked either; whether dry, raw or cooked. Any of these foods can lead to an upset stomach and in large quantities could cause red blood cell damage. You won’t always see poisoning signs straight away as it can take a few days for the toxic effects to be obvious.

Another ingredient toxic to Frenchies is something found in sugar-free gums or mints. It’s called xylitol and is even more poisonous than chocolate. In fact, I would go so far to say that it is the most dangerous food for French Bulldogs in the whole world! If they just eat one stick of gum with xylitol, a small dog could see their blood sugar levels dip considerably. If they consume enough, it could damage their liver irreparably and possibly even kill them.

Other foods and household items that can contain xylitol include:

It’s a common misconception that bones are great foods for dogs, but real life unfortunately isn’t like Tom and Jerry. When bones are cooked, they can become brittle and will easily splinter when chewed. Given how strong Frenchie jaws are, that cooked bone could shatter into small pieces which could push a hole in them internally or get stuck causing injury. I would also recommend not letting your Frenchie have rawhide chews because they can also get stuck and cause choking.

Many owners mistakenly think that any fruit and vegetable is going to be healthy for their Frenchie. However, this isn’t the case with avocado, as it can be bad for a French Bulldog, but only in certain circumstances. Avocados contain a poisonous toxin called persin which when eaten in large quantities can lead to vomiting and diarrhea. However, persin is mostly concentrated in the avocado skin and pit, rather than the fleshy part.

In most cases, if your French Bulldog eats some avocado, he’s probably going to be fine. You should certainly avoid letting your Frenchie eat the poisonous skin and stone.

Generally, we would not recommend any type of nuts in your Frenchies diet as they come with a huge choking risk. But there are two here that are particularly potent, and for a good reason too.

When these nuts are eaten in large quantities, the fat in them can lead to diarrhea, sickness, and possibly even canine pancreatitis. Macadamia nuts are a particularly poisonous food for French Bulldogs as they can lead to nasty side effects such as hyperthermia, tremors, vomiting, and lethargy. The poisoning can last for a couple of days.

These are such a dangerous food for French Bulldogs as any type of seeds can lead to serious issues with your dog’s digestive system. Any type of pit can get stuck in the small intestines that Frenchies have, possibly even blocking them, particularly with younger and smaller puppies. Some pits found in fruits such as peaches and plums even contain levels of cyanide. While it would take a lot of the pits to poison your Frenchie, it’s a bad food whichever way you look at it.

In conclusion, don’t get paranoid about every single thing your Frenchie scraps up off the floor or in the yard. Chances are, they will be fine even if it accidentally happens. Just be aware of what they are eating and don’t hesitate to contact a vet if you have any concerns.

Looking for something healthy you can give your Frenchie? Check out this blog: 7 Hidden BENEFITS of Coconut Oil for French Bulldogs