Can Your Frenchie Catch a Cold? 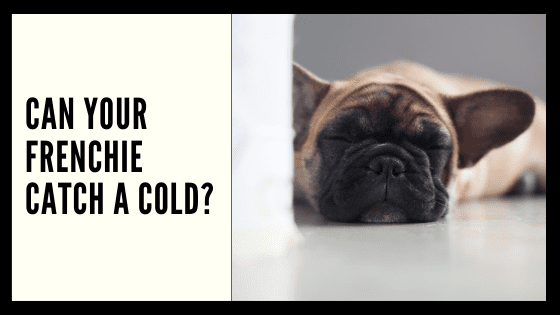 As we get closer and closer to the winter months, aka cold and flu season, it is important to be aware of your French Bulldog’s health. Most of us will be able to shake off a cold, but what about our beloved Frenchies? Can they get colds too? Let’s find out.

French Bulldogs CAN catch a cold and are actually more prone to than other dogs. This is due to their flatter faces which can cause mucus to get trapped in their head more easily. Their colds can also progress into more serious illnesses like pneumonia if you are not careful.

While dogs can get “colds”, they are not the same cold viruses as the ones that humans get. Dogs get infections that cause cold-like symptoms like a runny nose, sneezing, and blocked nasal passages. With your Frenchie being more at risk of having any of these symptoms, it is important to pay close attention to them and identify what it is and what is causing them.

If you are worried about your Frenchie’s ability to fight off illnesses like colds, a great way to strengthen their immune system is to add a probiotic supplement to their diet. We have a blog dedicated to probiotics and their benefits called Why Your French Bulldog Needs Probiotics.

French Bulldogs can get colds. Here’s what the symptoms can look like:

These symptoms can indicate that your Frenchie may have caught a cold. However, they could also be the result of other various conditions including:

It is possible that your Frenchie just has a dog cold, but there are chances it could be a more serious sickness. Don’t take any risks. Always contact a vet for advice, especially if there are multiple symptoms and the symptoms are persistent.

How to Treat Your French Bulldog’s Cold

In most cases a little bit of a mild cold isn’t a huge issue. It should clear up by itself. But you should call your vet anyway if you believe your Frenchie has a cold. That will let them rule out anything more serious. Vets can perform a number of checks and tests which include listening to the chest and lungs. If they suspect there is a serious illness, they may progress onto checks with x-rays, blood tests, and so on. If your French Bulldog’s cold symptoms are a more serious condition such as kennel cough, vets will prescribe rest and recuperation, antibiotics, fluids, and possible cough medicine. If you think your French Bulldog has caught a mild cold, you can help them out just like you would a kid with cold symptoms. Here are some pointers:

· Make sure your Frenchie stays warm, cozy, and dry.
· Don’t take them outdoors into cold weather.
· Limit their physical activity to preserve their energy.
· Provide plenty of water to keep them hydrated.
· Soothe a chapped nose with a dog nose balm.
· Feed them easy to digest brown rice and boiled chicken.
· NEVER give them human painkillers.

It is impossible to eliminate the chances of your Frenchie getting a cold. Just like humans, there is no vaccination for a common cold, but there are precautions you can take to try to avoid it. Try to keep them as healthy as possible by keeping them out of super cold weather, well rested and fed, and updated on any vaccinations recommended by the vet.

In most cases, the cold they catch will clear, but always exercise caution with professional veterinary advice.