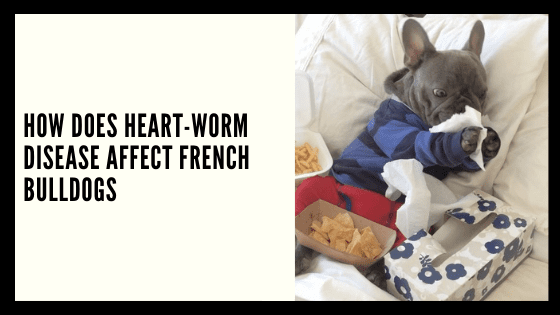 A French bulldog can acquire a heartworm disease if an infected mosquito bites it. The parasite can enter the dog through the tissue and then reach the bloodstream, from where it can affect the heart and lungs. This disease is transmitted through mosquitoes from one dog to another. It can be life-threatening, if not treated on time. Symptoms include coughing, difficulty breathing and being sluggish. Heart and lungs can be severely damaged without proper treatment.

Heartworms can develop inside the infected dog for five to seven years. The worms can breed and die inside the body all these years. During this time, your dogs would be fighting the damage caused by the heartworms.

Panoramis can kill the heartworms before they mature into adulthood.

How To Prevent French Bulldog From Worm Infections?

To prevent your Frenchie from getting infected from all these parasites, cleanliness is the key.

Start an annual worming routine for your Frenchie and follow up regularly. Keep in mind your Frenchie’s age and the worming product to decide on your worming treatment. Young Frenchies who are two weeks old requires to be wormed every two to three weeks till they are twelve weeks old. Then, you must worm your Frenchie once a month until they attain six months of age. Finally, the French bulldog needs to be wormed once in three months to prevent them from picking parasites.

Bottom line, as long as your Frenchie is kept in a clean environment and well-groomed there shouldn’t be any issues. Take a higher precaution if you live on a lot of land or if your Frenchie is mostly outdoors! A healthy Frenchie is a happy one.