How to get Rid of French Bulldog Acne the Natural Way 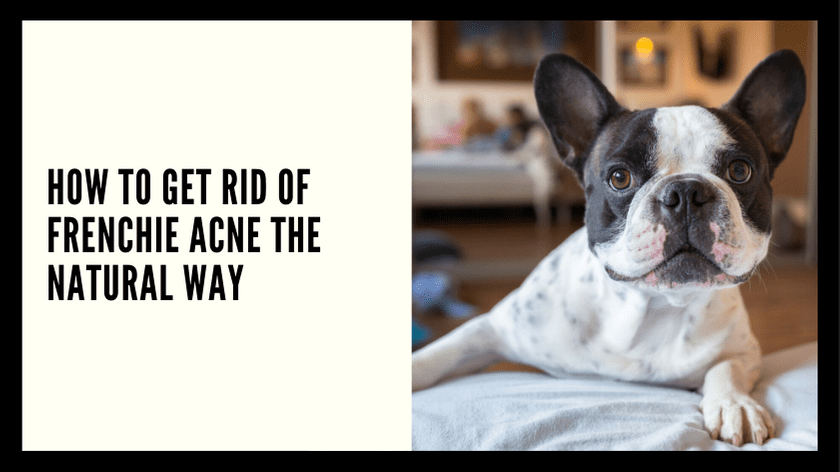 No one wants to be covered in pimples, not even your little Frenchie. At the first sign of French Bulldog acne, it’s so important to take the right steps to clear it up. Frenchie acne, chin pyoderma, puppy dermatitis, muzzle folliculitis, no matter what you call it, it’s all the same thing—pup pimples! Outbreaks are most commonly found on Frenchie chins, muzzles, and lips, but can also show up around private parts too. Mild acne outbreaks in Frenchies are not usually painful, but more serious cases can cause a great deal of discomfort and agitation.

Causes of French Bulldog acne include genetic predispositions, hormones, as well as trauma/stress. Frenchies especially and other breeds with wrinkly skin are more prone to acne because bacteria become trapped between skin folds, the perfect environment for pimples to bloom. What researchers and veterinarians know about Frenchie acne is that it is fairly similar to the zits on teenage faces around the world. It even impacts most Frenchies at the same stage of life; in dog years that’s around 5 to 8 months old. Acne typically clears up after dogs turn 1.

Generally, pimples originate as blackheads or raised areas on hair follicles that become infected with multiplying bacteria and result in pus-filled whiteheads. French Bulldog acne doesn’t always look like your classic pimple outbreak, so how do you know if that’s what you see on your Frenchie?

Symptoms of French Bulldog acne include:

You want to treat your Frenchie’s acne as soon as possible, especially if they react with pain when you touch the area or have scars from previous outbreaks. For other tips about Frenchie skin/acne and whether or not they need to visit a dermatologist, read our blog called 5 Signs your French Bulldog Should see a Frenchie Dermatologist.

How to get rid of your French Bulldog’s acne:

From creams to laser-beaming zit-killing machines, humans have manufactured a wide range of products to get rid of acne. Thankfully, it’s a lot simpler when it comes to getting rid of your French Bulldog’s skin condition. Nu-Stock helps prevent and treat stinky, irritated or infected wrinkles, but it’s equally powerful on pimples!

Along with pimples, Nu-Stock is used to treat: