Is your French Bulldog Licking his Paw Excessively? 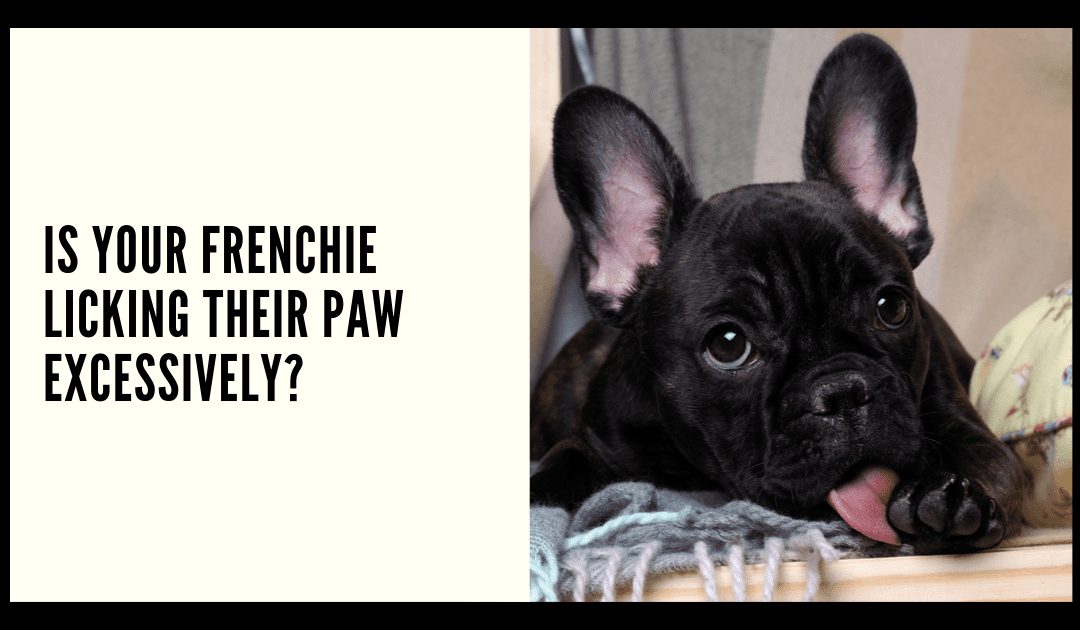 French Bulldogs can be a Breed that suddenly start to lick and chew their feet.  Excessive paw licking can be very frustrating, not only to the dog, but also the owner trying to trying to rectify the problem.

There can be a number of reasons why Frenchies lick their feet and it is often a process of elimination to find the actual cause.

This is the first thing to look for. Debris such as burrs, small stones, sticks, grass seeds etc.  might be the cause for your French Bulldog to suddenly start licking or chewing their paws.

Spiders, bees, ants, wasps in fact any number of insects can cause a reaction to your dog.  It is advisable to seek Veterinary advice should you be concerned.

Often a simple anti-histamine will settle down a reaction to an insect bite such as Benadryl. Be sure to use the proper dosage per the weight of your Frenchie!

The bite of a single flea is enough to trigger a reaction if your French Bulldog is prone to Flea Allergy Dermatitis.  If this happens to be on your Frenchies legs or paws, it can start the process of chewing and licking in this region.

Frenchies may also have food allergies or food intolerance to certain other ingredients, such as beef, chicken, fish, and soy.  You will need to eliminate every suspect food at once and introduce them one at a time over a period of time to determine if one in particular is causing a problem.

Yes, you read that right, some Frenchies just enjoy chewing their feet.  So much so that it can develop into a very hard to stop habit.

Another reason why a French Bulldog could be chewing on his feet is because of an obsessive compulsive behavior. Frenchies can develop Canine Compulsive Disorder, which is brought on by anxiety, stress, or boredom.

Licking can be very calming particularly for a nervy Frenchie.  It releases feel good endorphins and your French Bulldog starts to associate this feeling of calm and happy to its behavior.  This type of behavior is often the hardest to correct and will take stimulation and distraction for the behavior to try and break the habit.