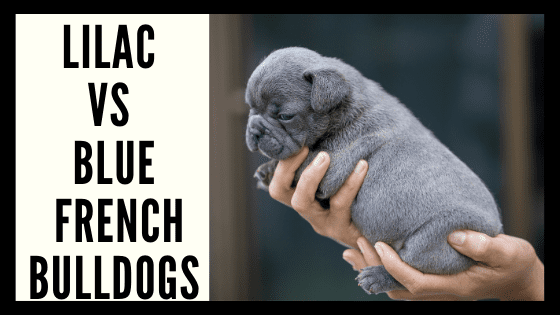 Lilac French bulldog has a noticeable lilac hue of the coat. It occurs due to the same dilution gene that causes a blue hue of hair. If you would ask us to describe this coat color, we can say it a pale greyish-brown coat. This type of color occurs spontaneously when a dog is a carrier of a recessive gene.

An Isabella or a Lilac French bulldog will have the genotype bbdd (homozygous for liver, homozygous for dilution).When a Lilac French bulldog is born, its coat may resemble a coat of a blue Frenchie. As it matures, its coat gets a lighter coloration and a visible Lilac hue. The eyes in a Lilac French bulldog are usually blue, light grey or amber. Their noses are usually pale pink or a greyish-brown and have visible pale pink markings around the eyes and mouth.  This type of dog requires a special way of breeding in order to escape potential health issues. That’s why rare-colored Frenchies are expensive and their prices range between $5,000 and $15,000.

Blue French bulldogs can thank only to their genes for having such an amazing fur color. There are common misconceptions about blue-colored Frenchies that they usually show dozens of health issues in the future. As a reputable French bulldog breeder, I must say that it’s not true at all. If a dog was properly bred, and its parents were completely healthy, there’s no way that such a dog will express health issues throughout its lifetime.T

he reason for having a sort of grey-blue coat is in carrying a dilute gene. It’s often claimed that dilute dogs are less healthy than those with normal pigment. This misconception has most likely come from the prevalence in some breeds of a condition known as Color Dilution Alopecia (CDA). This kind of condition is actually the result of a faulty version of the d allele, known as dl. That’s why is very important to choose only completely healthy Frenchies for mating. It’s important to note that not all breeds carry this faulty allele.  The majority of blue French bulldogs and Isabella French bulldogs are completely healthy if have been properly bred.

If both parents carry this rare dilute gene, then it’s very likely for their puppies to have a blue/mouse coat. The coat color of blue dogs may vary from almost black, to dark grey and light grey to blue. However, in case it’s difficult to determine when a puppy is still small whether it’s blue, it should be obvious that the nose is blue. Blue French bulldogs usually have light blue or blue eyes that look simply thrilling and dramatic.