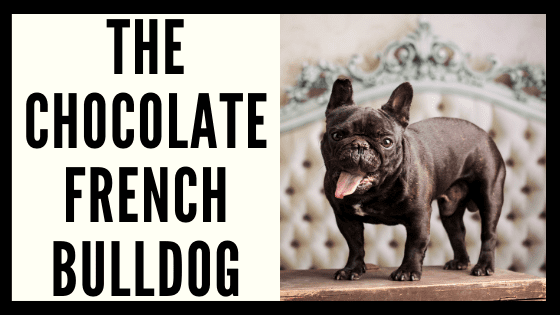 I always say chocolate French Bulldogs are even prettier in person. Sometimes just looking at pics online do not do them justice. Their coats look amazing in sunlight!

Here’s the genetics on the chocolate color which is found on the B-locus. It’s a recessive gene. In order for your Frenchie to express chocolate on their coat they must inherit two copies of the gene. Chocolate is not a testable gene as of right now and the only way to know if your dog carries chocolate is to breed to chocolate frenchie or one who carries chocolate.

There is also a different shade of chocolate that looks totally different then the original chocolate  that has been introduced over the years. They are calling testable chocolate because it can be tested.

Just as with the other color variations you can have brindling in the coat or solid. The gene that determines this is on the K-locus. If they inherit one or two copies of the brindle (Kbr) gene they will express brindling in their coat.

Chocolates may also have tan points which has to do with the A locus. If they inherit one or two copies of the tan points gene, At, they will express tan points.

Wait? What? How can this be? Your dog is either visibly chocolate (or maybe even lilac), but this test is telling you that your dog is not brown nor can it have brown offspring.  Could the test be wrong? Have you been swindled by your breeder? You sit down on your couch, joined by your now fraudulent chocolate or lilac snort machine and decide to Google the $#!* out of the B Locus. For three days. Possibly more.

From the viewpoint of a Newbie, color DNA can be intimidating at first.  This article isn’t meant to delve into the nuances of complicated genetics, rather to help those new to Frenchie DNA better understand why their visibly lilac or visibly chocolate dog came back with a DNA test that contradicts the color you see before your eyes.

There are currently four possible ways a French Bulldog can carry what is called “chocolate” in terms of DNA. Three are testable on the B Locus and one is now newly available through Vet Gen on it’s own locus, being referred to as “Cocoa – French Bulldog primary chocolate gene”. Until recently, this was referred to as non-testable chocolate in Freanch Bulldogs.

If you’re testing your dog for chocolate by any other company than Vet Gen prior to 1/31/20, this means that you will only get results by reporting the alleles on the TYRP1 gene and if your dog’s chocolate didn’t come from there, you will get a big fat B/B.