Why is Deworming French Bulldogs so Important? 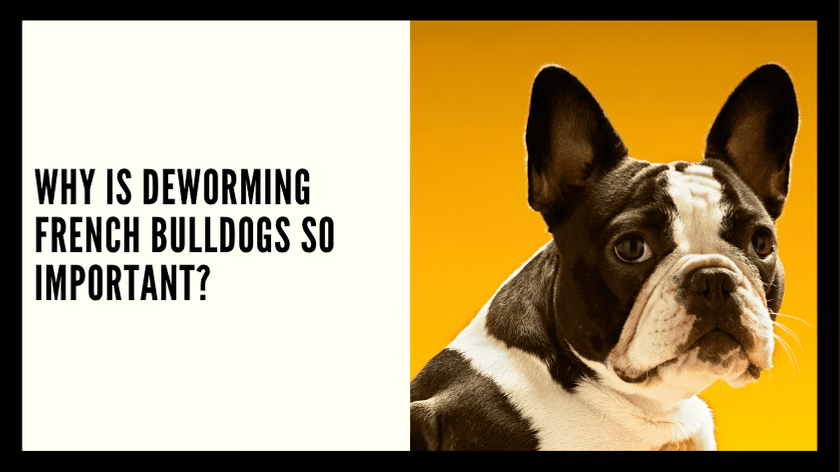 No one wants to see their French Bulldog sick or having any symptoms of infection. We all want our Frenchies to be agile, fit and healthy. It will be appalling to see your bulldog suffer from any parasite infestation. These parasites can ruin and cause different levels of discomfort to your French Bulldog. Hence it is quite pertinent to keep your Frenchies from these parasites that will want to infest them.

Deworming is an essential exercise in the life of French Bulldogs and ought to be done routinely. Different worms can infest your Frenchie. Worms such as whipworms, tapeworms, and hookworms can be a threat to your French Bulldog; hence we must do all we can to protect them from these parasites.

How routinely should you deworm your French bulldog?

It is better to prevent the infestation of a worm than to go through all the rigors of treating them after they have become infected. Hence a monthly or quarterly deworming is okay for your French Bulldog to stay healthy – free of worms.

We will check the different kinds of worms that can infest your French Bulldog.

Some worms that infest French Bulldogs can remain dormant for a long time before developing into the infectious stage. Also, some parasites can be transferred from the adult Frenchies to the newly born puppies. Hence it is advisable to deworm your newborn puppies immediately they are born and about four weeks after they are born to eradicate the presence of any inborn parasites.

Some symptoms of Roundworm Infection in French Bulldogs are:

Roundworms can survive several weeks outside the host. Hence the environment can be infested when an infested in Frenchie’s stools around. It is therefore essential to clean the room daily to stop the spread of roundworm from the stool of the infested French Bulldog.

Since it is quite difficult to get rid of roundworms after infestation, a monthly deworming routine will be ideal to keep your French Bulldog safe.

The eggs of roundworm can be killed only by an aqueous iodine solution. Apply this too in your treatment or prevention mechanisms.

This can also be gotten from a contaminated environment, especially when the larvae have been ingested. Also, your French Bulldog can be infested if it plays on infected soil. Hookworm usually colonizes the environment where they are, and when they infect your Frenchie, they can make your Frenchie become anemic and eventually die. To prevent this infestation, the place where your French Bulldog is kept ought to be constantly neat coupled with a frequent deworming routine.

Whipworm can lead to the quick and sudden death of your French Bulldog. They can cause the dehydration of your Frenchie and can eventually lead to their death. The notorious fact about this worm is that it can survive outside the host in the environment for more than a year. It can be eliminated only by milbemycin. They cannot be killed by other products that can kill other worms. They are a lot more difficult to kill than other common worms.

If your Frenchie eats fleas and rodents, then there is a high chance it must have gotten a tapeworm in its intestine. To help control this type of worm infestation, you could easily practice flea control measures. Also, your French Bulldog should be placed always on restrain if there are many rodents where it stays; this is to prevent it from going to hunt rodent on its own.

For you to preserve the health of your French Bulldog, you should be wary of their environment and how frequent you clean them up. You should pick up their poos all the time and stop your Frenchie from eating the poos of other dogs or even their own. A regular deworming routine should be maintained too.

You can also give your French bulldog a beautiful playground to prevent an infestation that could come with the soil. To prevent the death and poor health of your bulldog, it is pertinent to deworm them routinely so they can live healthy and happily with you.